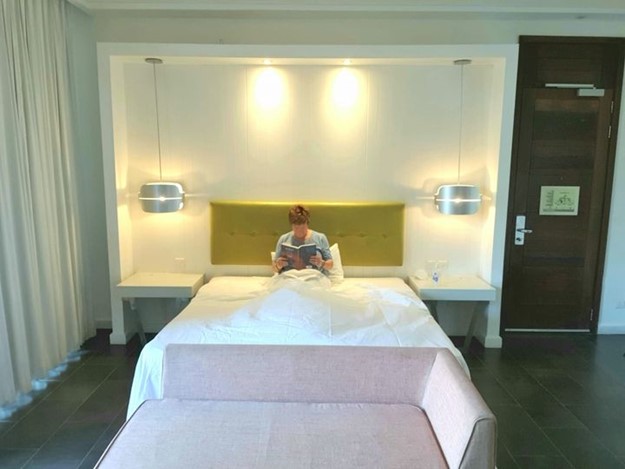 Jano and the Wakashio. Two perfect reasons to cut short my six months in paradise. So, when the High Commissioner offered me a fifth repatriation flight, I was in.

I’m told the fare of R8500 ex Johannesburg is cheap compared to the R15000 others are paying. At the airport, you’re allocated a quarantine hotel, and I got Long Beach, a 5-star resort in the NE. Well, OK: I’m in a back unit with one square centimetre of sea view, but it’s free (for Mauritian citizens – non-citizens are forking out Rs52000 per person) and I’m spoilt with a coconut palm plantation and happy birds just beyond my patio.

We filled an Airbus A340, 70% returning South Africans, the balance citizens. We queued often and for long and completed fistfuls of forms. Masked staff herded us around corners, up staircases, through deserted hallways. In Joburg we even had to place our luggage on the tarmac to allow sniffer dogs to look for drugs. It was a holocaust movie, with one massive difference: each official was knowledgeable, helpful and compassionate. And the passengers polite, subdued – behaviour that would tickle social observers.

I’d been up since 04h00, so our police escorted 22h40 arrival at Long Beach was overdue. After nurses stuck swabs down my throat, I followed the usher to my room, clutching a paper bag bearing supper. Not in my wildest dreams would I have guessed that in the next two weeks I would double up as my own cleaner, entertainer, waiter and dishwasher and that leaving my room could incur a Rs100 000 (approximately R48 000) fine. I had landed in a Five-Star hotel minus the stars. To be continued.

Quarantine Diaries – Day 2: Settling in (or not)

The trip: Madrid to Sealife

Quarantine Diaries – Day 12: Attitude is everything