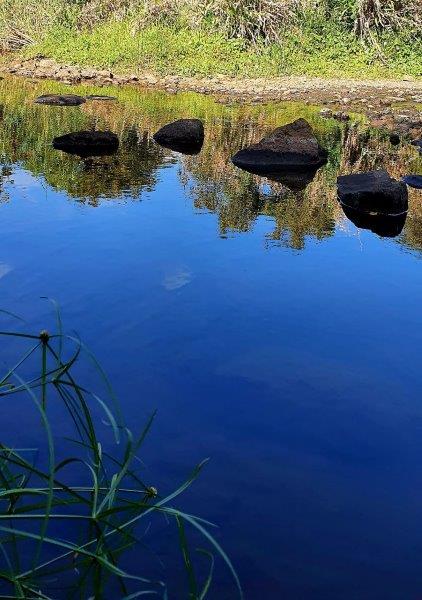 This morning we leave home at six. Summer’s haze hasn’t settled yet, so the colours are clear: purple sea and miles of swaying cane under a blue dome.

Google Maps shows Beaux Songes at the edge of an eight-kilometre green circle, squashed between Palma and Bambous. In the South, the village spills onto the main road to Cascavelle. The fields may disappear one day because the sugar price has crashed. With the mill closed, sugarcane travels to factories in the East. Bleak times. But I’ll go with the mindfulness gurus for now: if you want to avoid depression, it’s best to enjoy the gift before your eyes and hope your playground doesn’t turn into another concrete slab.

﻿On our walks, we claim ownership of the fields. They’re generous, photogenic. Today we amble to La Cressonnière, a patchwork of allotments next to Medine’s litchi plantation. I have a backpack and money to buy produce. I’ve become friendly with Michel, a big man in his sixties. He stands, mammoth hands on his hips, holding his cap as we discuss the merits of organic certification and a roadside stall.

I buy vegetables and sit in the shade of a mango tree. The rivulet in front of me spreads like an open hand so water can flow through the watercress plots. Silence is the very sound of peace; my body listens and softens, and I am made aware that we must urge the youth to appreciate nature. According to Jean-Martin Fortier, you make a decent middle-class living from two hectares of bio-intensive crops. Nowadays, farming is neither arduous nor expensive, with low-key mechanisation, careful layout, crop rotation. Every reluctant scholar — or not—is a candidate for self-employment in agriculture, and the government supports small farmers through training and financial incentives. More than that, there’s a ready market in Mauritius. If only!

Time to go: my heart’s racing, I’m scheming how Medine could use its soil to draw young men and women into agriculture and to create food security for the island nation. Another pipe dream, friends would say, and my reply would be to bury me the day I stop dreaming.

We walk past the plaque dedicated to Charles Baudelaire. In 1841 the 20-year-old poet travelled to Mauritius and fell in love with his host, Emilina Autard de Bragard, who lived in the vicinity. She inspired his first poem when he returned to Paris. With the grace of a nineteenth-century European gentleman, he posted the sonnet to her husband, to pass on to her. Sadly, Emilina died in a shipwreck when she was 39, but À Une Dame Créole remains a treasured work on another continent almost two centuries later. Is it awe I’m feeling, or the hope that bridges past and present cultures?

I’ve been thinking about leaving Beaux Songes, ostensibly because it’s isolated; my complaints about lack of company repeat like acid reflux, boring even me. On the way home, I re-think—yet again. The village and its surrounds exemplify community, my conditioned assumptions are the problem. Here is a safe, discreet neighbourhood. I live among ordinary people with no expectations, the very reason I moved to Beaux Songes.

After our two-hour walk, we return in time to see the biker-shepherd herding his goats to pasture. I feed the dogs and water the garden, then I go upstairs to my desk and the view of coconut palms and distant sea. The coffee in my hand triggers excitement for a good morning. Monique arrives shortly, and I look forward to the gentle cleaning noises and smells of lunch. Another day begins.

Such a vivid description of the village and the fields surrounding it. I hope to return again to experience the peace and beauty of those walks that you introduced me to.

Love your writing, pulls a person in and makes you feel you part of your escapades ♥️