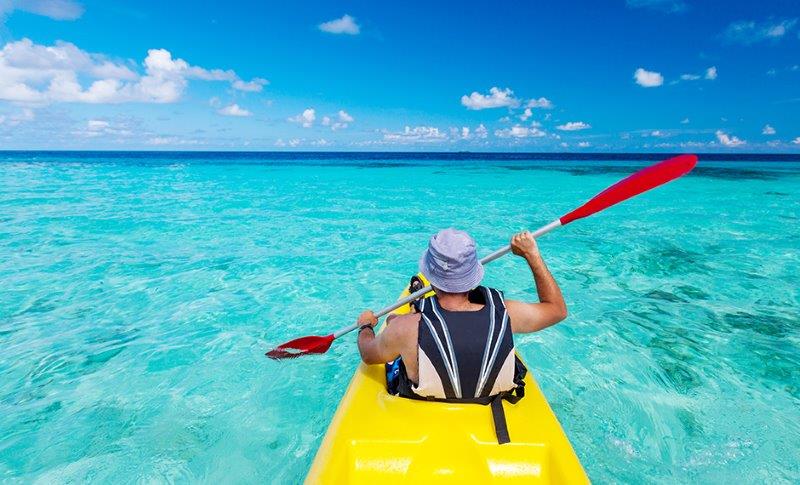 Kayaking in the lagoon is a good way to appreciate the crystalline waters and the little creatures which live under the surface. A great family experience.

Kayak rentals: Hire your own kayak and give yourself the independence of going where the wind (not the tour guide) decides: https://www.tripadvisor.com/Attraction_Review-g293816-d14804022-Reviews-Sea_Kayak_Adventures-Mauritius.html

Kayak expeditions along with boat trips, hiking, and kayak fishing along the northern coast of Mauritius. https://www.tripadvisor.com/Attraction_Review-g293816-d14804022-Reviews-Sea_Kayak_Adventures-Mauritius.html

Kayaking around Mauritius: Yemaya Adventures was recommended by a blogger who wanted to kayak around Mauritius. Take a look at their website: https://yemayaadventures.com/sea-kayaking-mauritius/

Mauritius Attractions offers this special adventure for fans of kayaking and caves.

The excursion starts in the Pointe aux Sable lagoon south of Port Louis. After a short safety briefing and slipping on your life jackets, you will travel south along the wild cliffs of the West before reaching the sea caves, which you explore in your kayak.

You will need strong maneuvering skills as you paddle along the basalt rock gardens while entering the caves. Apart from marvelling at the clear waters underneath your kayak, you will feast your eyes on eight caves.

The trip route is about seven kilometres and passes the Belle Vue lighthouse before ending at Albion beach.

Note that this excursion is for experienced sea kayakers aged 18 and above, and is under the supervision of experienced guides. Safety is the primary concern. The excursion starts at 08h00 and ends at around 13h00.

About the Famous Albion Lighthouse:

The lighthouse towers 30 metres above the cliff and was built in 1910. Its two white flashes occur every ten seconds and are visible for 29 nautical miles. Historically, it has been a vital instrument of navigation and still plays a major role to guide ships entering the harbour access channel.