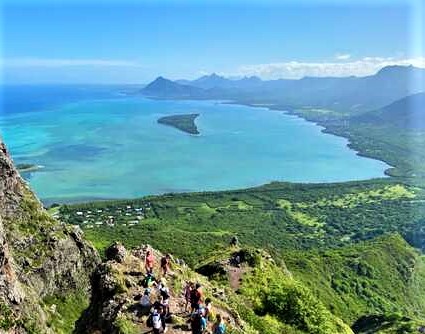 Climbing Le Morne Brabant on the south-western extreme of Mauritius is like going on pilgrimage, an opportunity to ponder on a site which served both as shelter and deathbed for inhabitants in a shameful past. UNESCO proclaimed this iconic mountain a World Heritage site in 2008, as it is one of the most important historical locations in Mauritius.

Brief history: The Dutch introduced slavery to the island in the early 17th century, ostensibly to work on sugarcane fields and cut ebony trees, which had a strong market value. When the French took over the island, they continued to trade in slaves from Africa, Madagascar and India.

Le Morne Brabant, because of its inaccessibility, was used by escaped slaves as a refuge from capture, and over time built entire communities up the mountain. Upon the abolition of slavery in 1835, it is said the army was sent up the mountain to tell them the good news. It is a travesty of justice and a symptom of distrust of the authorities that many slaves, believing they were about to be re-captured, jumped to their deaths from the unforgiving cliffs.

You don’t need a tour guide to climb Le Morne, it’s a relatively easy hike to the shoulder of the mountain. In non-COVID times I met dozens of tourists going up and down, so you need not fear for your safety or security.

Steph, originally from Mauritius, tells how it’s done on her delightful travel blog site. Entertain yourself by reading through her blog: https://www.letsventureout.com/category/destinations/mauritius/

However, if you want the extra information provided by a professional, I can recommend Yanature’s guides. Look at their hikes, you may be interested in something else they offer. Guaranteed, Yanature doesn’t pay me, and I don’t know them personally!   https://www.trekkingmauritius.com/hiking-mauritius/

You will find spectacular views of the Southside of Le Morne on the climb up, and of sprawling Black River and the West Coast when you’re on the shoulder.